In July 2015, Reuben Abati, the Special Adviser on Media and Publicity to President Goodluck Jonathan, bemoaned that his phones that rang endlessly remained deafeningly silent when his boss was voted out of power. Sadly, the phones of thousands of colleagues, family and friends of Abdullahi Ali Yakasai stopped receiving goodwill messages from him from the fateful morning of Tuesday, 20th September, 2022.

The phone calls and messages ceased coming. The calls, messages and personal visits did a vanishing act. The daily admonitions and glad tidings dried up because Comrade Abdullahi Ali Yakasai was no more.

Our phones remained deadly silent from his messages. His death is indeed devastating and heart breaking for the people of: Yakasai Quarters, National Association of Academic Technologists (NAAT) community at both Branch and National levels, Association of Science Laboratory Technologists of Nigeria (ASLTON), the teaching and non-teaching staff at Kano University of Science and Technology, Wudil and the Nigerian Labour Congress (NLC), Kano State Chapter, mourned one of its most formidable and reliable comrades.

Without a shadow of doubts, Abdullahi Ali Yakasai was a man of many facets – a family man, public servant, labour leader, community developer and humanist. Yakasai’s patience allowed him to win the hearts of many. In Yakasai, Abdullahi was an expert who could see beyond short term gains with admirable consciousness in the promotion of togetherness and socio-economic development. He, alongside other leaders of Yakasai Zumunta mobilised resources for the execution of basic infrastructure and amenities that raised the living standard of the community.

To keep the restive youths from the allure of anti-social gambits, they floated community funds mobilisation to pay SSCE fees for the less privileged students. He also participated actively in the provision of the material needs of the poor widows and vulnerable members in the community. The forum also floated scholarship awards to ensure that indigent and intelligent secondary and tertiary school students acquire the 21st Century skills for self-sustenance.

In community planning, Abdullahi was visionary. He planned projects with cognitive maps allowing him to organize his plans and tease out flaws. He chaired and served as member to committees celebrating outstanding sons and daughters of Yakasai. He was a man who was responsible and accountable to his commitments. Comrade Auwalu Mudi Yakasai claimed that “being a community leader is not an easy task.” One of the major dilemmas faced is the conflict between responding to the needs of the family and the collective needs; both are legitimate concerns. To one’s astonishment, Abdullahi balanced the two. He also became magnets of other tasks in the community. Having proven that he could be depended upon, he was eventually appointed into all other tasks. He sets aside his personal ambitions in order to facilitate the development of others. He absolutely excelled at everything he puts his attention to. With a personal mantra of, “do the right thing, the right way, and right now” he lived and died in activism and community development. 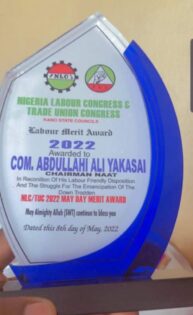 He was extraordinarily generous in sharing his time and wisdom with younger comrades; most notably in his role as a mentor. Across his decades-long career as a union activist, organiser and leader, he was completely dedicated to empowering workers to take action to win improvements in their lives at work and in broader society. He campaigned for dignity, respect, peace and for a better world for all.

Abdullahi was friendly and accommodating. His messages were delivered through SMS, Facebook Messenger, Instagram DM and WhatsApp on daily and weekly basis. Many confessed that his message alerts announced to them, it is Friday. Speaking to me, Umar Abdurrahman, a staff of KUST, described Abdullahi as a colleague of inestimable value, who cared and loved everyone to a fault. He noted that his memories would remain indelible. “I received SMS from Abdullahi every Friday. More fascinating, I never met him in person. He treated me like a friend. He was someone who spread happiness and peace. His care will be missed forever. His legacy lives and breathes kindness. His efforts to give pieces of valuable advice and hard work among other virtues, will be remembered.” The response of many after the announcement of his death was “we have lost a friend.”

May Allah in His infinite mercy forgive Abdullahi Ali Yakasai, a lovely person, kind and generous not just with material things but with his time, intelligence wealth of experience. May Allah give his family the fortitude to bear the loss of a tireless advocate of any just cause.

Muhammad, an Associate Professor of International and Strategic Studies writes from Kano University of Science and Technology, Wudil.

Skills rather than just degrees: A timely professional advocacy

Kano: Getting the ground good for Gawuna and Garo- Bala Ibrahim

Remembering Danladi Ndayebo: An amazing wanderer with a compass – Muhammad…