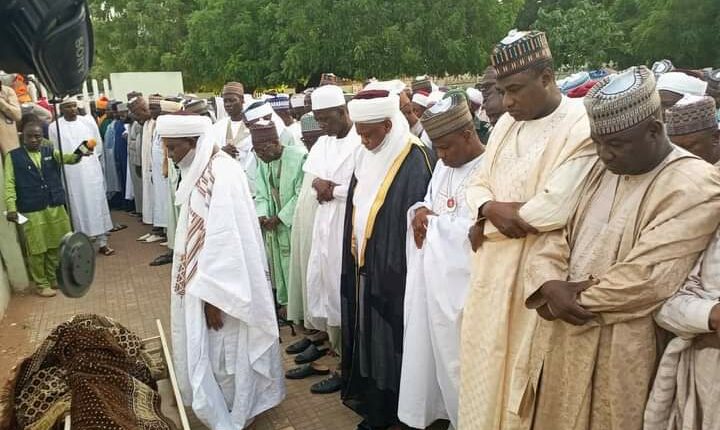 The remains of late Shehu Malami, an Industrialist and one time Nigeria’s Ambassador to South Africa, were on Thursday laid to rest in Sokoto.

The News Agency of Nigeria (NAN) reports that the funeral prayer was led by Chief Imam of Sultan Bello mosque and the remains buried at Hubbare cemetery.

The funeral was attended by Gov. Aminu Tambuwal of Sokoto State, former Gov. Attahiru Bafarawa, Sultan of Sokoto and Alhaji Sa’ad Abubakar III among other dignitaries.

Late Malami died while receiving treatment in Egypt on Dec. 19, at the age of 85 and the corpse was brought back to  Sokoto on Thursday.

The deceased has been described as a rare gem who was an accomplished banker and industrialist whose footprints were still visible on the national and  international landscape.

The deceased, vast educated and referred to as “the Oxford man” begun early education in Sokoto, also at basic schools at Bida and Katsina.

Later he was variously in Colleges in England for his GCE ordinary and advanced levels. Later he bagged a degree in law from the Middle Temple, London and was a visiting scholar at Wolfecon College Cambridge and was also an Associate Member of St.. Anthony’s College, Oxford.

He worked as Private Secretary and then as Special Assistant to Sultan Saddiq Abubakar III. He also had a stint at the BBC as a broadcaster.

He become a technocrat and banker on the international scene, his presence was felt as a member of the International Advisory Council of the World Economic Forum Foundation, Geneva, Switzerland.

Gov. Tambuwal described late Malami as humble and astute man who would be remembered as a repository of the norms and values that make Sokoto Caliphate tick.

Tambuwal said his knowledge of the country, its politics and economy would also be missed on the national scene, especially at this time of another democratic transition. (NAN)

Police confirm killing of Chinese national in Zamfara by bandits