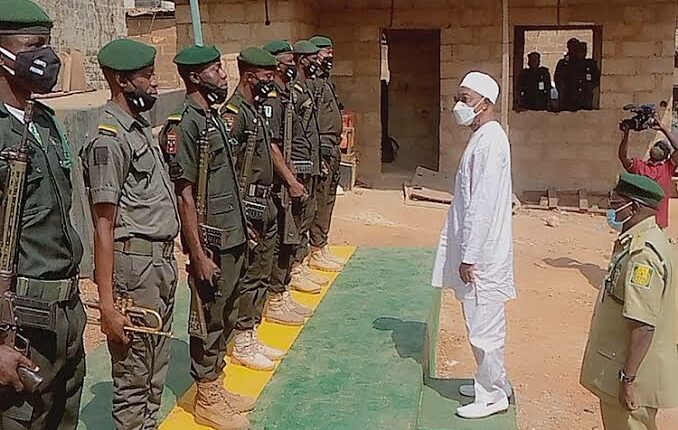 The Federal Government has restated its shoot on sight order to the Nigerian Correctional Service (NCoS) against intruders and invaders at the centres following threats of attack on the facilities nationwide.

The Minister of Interior, Mr Rauf Aregbesola, gave the directive at the unveiling of the new service logo and uniforms on Monday in Abuja.

Aregbesola lamented that the goal of the administration of criminal justice would have been defeated and money spent on arrests, investigations, trials and prosecution wasted if inmates were allowed to escape.

He said “government said those who attack custodial centres must never live to tell their stories.”

The minister warned against posting of lily-livered personnel to custodial facilities, saying only sharp shooters who were trained to aim at the heads of criminals should be deployed to such centres.

According to him, “as far as I am concerned, whoever attempts to attack our facilities, whoever dares, should not live to tell the story. That is how best I can say it.”

He said: “Whoever attacks our custodial facility should be made to return to his maker.”

“I have said it before and I will say it again that all our facilities are red zones. Rifles are for criminals, not for hunting antelopes. You don’t need any order.”

“Don’t wait for any order. Anybody that comes to attack our custodial facilities which are the end or finishing line of administration of criminal justice, take them out.”

“Our facilities should be inviolable and any intruder must be made to pay a huge price. Inmates now know that they cannot escape by themselves. They gave criminals outside who want to help them to escape,” he said.

According to him, any officer that is too lily livered, that cannot shoot to kill, that cannot aim the head of a criminal, should be trained correctly.

“Train them to shoot the head of invaders, not legs. Whoever is not bold enough to shoot to kill, don’t take them to custodial centres, except maybe the female section.”

“Out of the over 70,000 inmates, we have less than 3000 and they don’t constitute any threat to us. So, those who are afraid to shoot, if you don’t want to dismiss them, let them be in the female prisons.”

“But those who are going to be in the maximum and minimum custodial centres, they must be very tough people. It is a serious matter. We have had enough of the embarrassment,” he said.

Aregbesola said that every naira being sent on administration of criminal justice would amount to a waste the NCoS could not keep the end.

“Besides the embarrassment, it would amount to wasting trillions,” he added.

Earlier, Controller General, NCoS, Mr Haliru Nababa, said that the NCoS Act 2019 heralded a paradigm shift in the service, turning it into a more humane and acceptable system.

Nababa said “to this end, there was a dire need to drive this phenomenal change into the system, by providing the appropriate setting required to accommodate the ideals of the new order.”

“As part of efforts to blend with the renewed philosophy of the Service, new Service Uniforms were proposed and were subsequently given gracious approval by our supervising Minister, Ogbeni Rauf Adesoji Aregbesola, Minister of Interior.”

“The role of officers and men in bringing to fruition, the lofty provisions of the NCoS Act, 2019 is critical hence, the need to have them represent the new narrative, attitudinally and also by physical appearance.”

“The introduction of new set of uniforms is strategic, as it denotes renewed vigour and readiness to add value to the Service.” (NAN)

Kano based NGO to present Charter of Demands to governorship candidates

2023: NBC tasks broadcast stations to abide by code of practice