Building collapse claims one, others injured in Kano

A three story building on Ahmadu Bello way in Kano has collapsed killing one person with others injured.

Solacebase reports that the building under construction with workers collapsed at about 1.39pm on Thursday afternoon.

It read in part ,’’Today being Thursday 17 March 2022, our formation, received emergency call at about 13:39 hrs from Nigerian Communication  Commission (NCC) reported an incident at Ahmadu Bello Way opp. State Library, when our men reached the area at about 13:46 hrs, found that, a building of 3 floor of about 200 X 200ft, which is under construction with difference workers inside such as Builders, Carpenters and many more.

The statement said the last floor of the building caved in while work was ongoing with several covered by the rubbles. 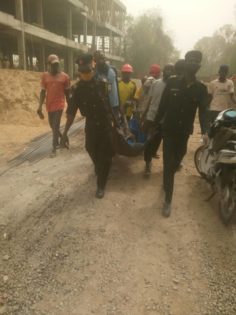 According to the statement, ‘’Danjuma Tijjani, aged  52 years old was successful rescued alive with serious injury and Rabiu Musa , 32 years old, was rescued unconscious but later confirmed dead at the hospital.

‘’The other victims went away with minor degree of injury.’’

The statement added that all the victims have been taken to Muhammad Abdullahi Wase Specialists Hospital for medical attention.

”The cause of the building collapse is yet to be ascertain, ”the statement said.

5 escape as kidnappers abduct 8 in Kwara