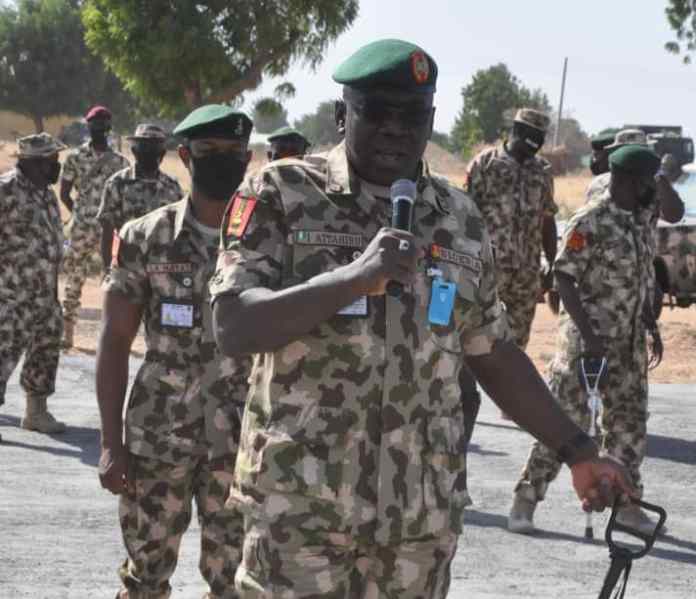 More than 24 hours after the death of the Chief of Army Chief, Lt. General Ibrahim Attahiru and other military officers in a plane crash, the Presidency is yet to name a replacement as the nation mourns the departed souls, PRNigeria reports.

President Muhammadu Buhari, at the burial of the fallen officers and men on Saturday, said Lieutenant General Attahiru was an epitome of gallantry and bravery which culminated in his being appointed the chief of army staff.

Buhari, represented by the Minister of Defence, Major General Bashir Magashi (rtd), praised Attahiru for his gallantry in the war against insurgency and described him as a military chief, who led from the front and emulated by others.

The President said he would be remembered for his landmark contributions to the unity of the nation as he expressed his heartfelt condolences to the families of the departed officers and men and all Nigerians.

However, PRNigeria gathered that General Keffi from Nasarawa State was not among the most senior military officers in the operation of the Nigerian Army. In fact, he has more than 30 senior major generals above him in seniority.

“The consequence of this if it is true, is that it will force these brilliant officers to retire at a period we need more hands in the prosecution of diverse operations across the country. I don’t think we need such mass retirement now,” a security expert opined.

However, a top military officer told PRNigeria that several factors are considered for the appointment of service chiefs beyond seniority.

“You know the President has the discretion to appoint anyone he so wishes with advice or probably a nomination from the Minister of Defence.

“Apart from Seniority in service, officers so considered must have been grounded in military operations and intelligence.

Some of the most senior and experienced military officers, PRNigeria learnt, include the current Chief of Policy and Plan, Major General Ben Ahanotu of Regular Course 35 from Anambra State. He was the Commander of the Military Operation that captured the founder of Boko Haram Mohammed Yusuf and his followers at their hideout in Maiduguri in 2009 before handing them over to the Police.

The Takeaways from President Buhari’s visit to France – Garba Shehu