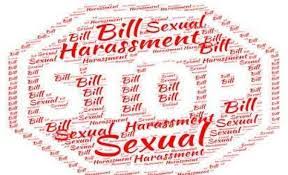 A consortium of Civil Society Organizations, under the umbrella of Anti Sexual Harassment Advocacy Cluster, working to contribute in addressing the prevalence of sexual harassment in tertiary institutions in Nigeria has pleaded with the presidency to hasten the assent of the Anti-Sexual Harassment Bill, considering its prevalence in virtually all tertiary institutions across the country.

Solacebase reports that the group made the plea on over the weekend, during an advocacy visit to the office of the Secretary to the Government of the Federation, Boss Mustapha in order to push for the assent of the bill waiting on the president’s desk.

The Anti-Sexual Harassment Bill, which aims to addressing the disturbing spate of sexual harassment across the country’s tertiary institutions, was recently passed by the National Assembly.

Initially, the bill was sponsored by Sen. Ovie Omo-Agege and 57 other senators in 2016. The 8th Assembly of the Senate (2015-2019) had passed the bill, but it was rejected by the House of Representatives when it was sent for concurrence.

Read Also:Reps move to include nurses, pharmacists, other health practitioners in headship of teaching hospitals

The documentary sparked reactions from many Nigerians who described the issue as a norm in Nigerian universities. The Senate passed the bill in July 2020, and it has been passed in the House of Representatives, by way of concurrence with the senate, on February, 8, 2022.

During the advocacy visit, the group decried the growing spate of sexual abuses, with women being the major victims and not much is being done to curtail the menace, at least to the barest minimum. It quoted a 2018 survey by the World Bank Group’s Women, Business and Law, which revealed that 70 per cent of female graduates from Nigerian tertiary institutions have been sexually harassed in school, with the main perpetrators being classmates and lecturers.

“Sir, the cluster has meticulously studied all the content of the above bill and based on our experience in working with the survivors of sexual harassment in tertiary institutions, we are confident that the bill, if assented to by Mr. President, will provide a uniform law that will address the rampant cases of sexual harassment in tertiary institutions in Nigeria”.

The group added that, “In view of the above, we are appealing to your good office, to encourage Mr. President to assent to this bill that will serve as a shield between the innocent female students and bad eggs among lecturers, who are hiding under this noble profession, to commit this heinous crime of Sexual Harassment”.

Responding, the Secretary to the Government of the Federation, Boss Mustapha, represented by the Permanent Secretary, General Services, Dr. Maurice Nnamdi Mbaeri, admits that sexual harassment is a global menace that needs a strong and effective legal frame work in order to fight it.

According to him, the menace should be declared as an issue of national emergency just as he decried the under reporting of sexual harassment cases in the media space. This according to him, is as a result of the absence of any designated mechanism to which victims can report such cases as well as the fear of stigmatization by members of the society.

Boss Mustapha said, “We have a lot of work today in this regard and I assure that yiu are at the right place and we will stop at to push your plea to the president because this laudable effort must not be allowed to go in vain”.

“I would also like to commend you all for your efforts and also that of the National Assembly for passing this very important bill, they must have seen and heard enough before reaching this conclusion”.

PDP has not released timetable for 2023 general elections – Official

Next Year at Aso Rock: Our birthday wish for PYO – Bashir Suwaid