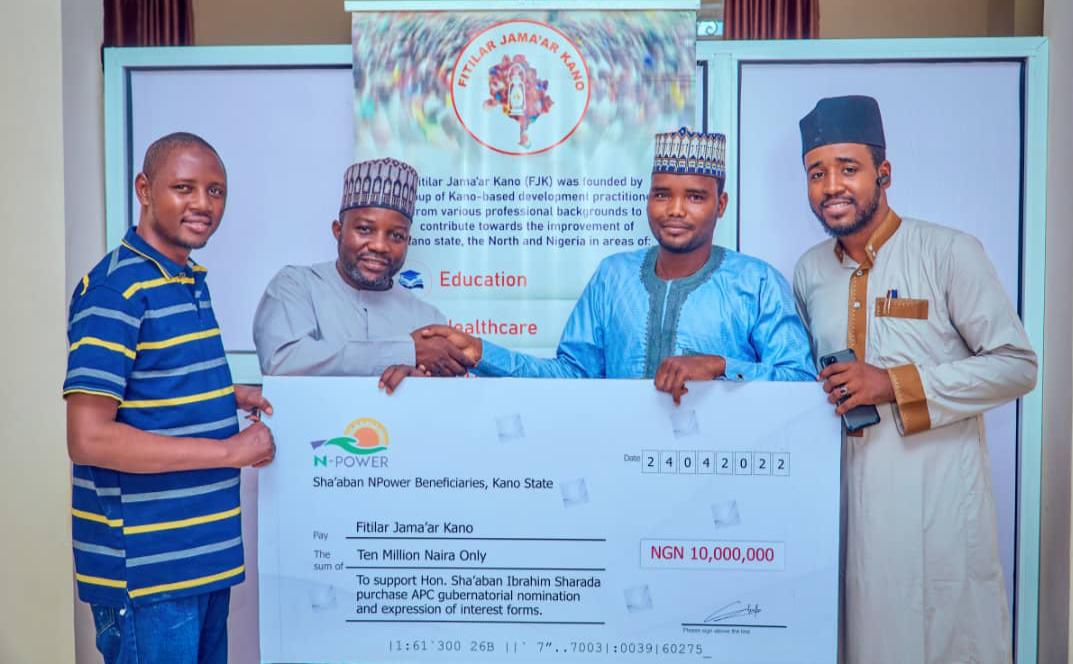 A non-governmental organization , Fitilar Jama’ar Kano has congratulated Muslims for the successful completion of the Ramadan fast.

The organization committed to identifying with credible leaders to encourage them in their bid to provide quality leadership has called on the people of Kano particularly, the youth, irrespective of political affiliation to celebrate Sallah peacefully devoid of rancour and acrimony, and ignore selfish politicians bent on using them to cause mayhem in the state.

This was contained in a sallah message issued by the Executive Director of the organization, Khalifa Mustapha Dankade, on behalf of Directors and entire coordinators of Fitilar Jihar Kano from the 44 Local Government Councils of Kano State .

‘’The group is following with keen interest the political developments in the state where a champion of politics without bitterness and violence-free politicking, Hon. Sha’aban Ibrahim Sharada has enjoyed the goodwill and solidarity of some patriotic groups and individuals from within and outside the state who came together to purchase an expression of interest and nomination forms for the youth ambassador, Member, representing Kano Municipal federal Constituency, Chairman, House Committee on National Security and Intelligence, and President General, Network of African Parliamentarians for Defence and Security Committees, Hon. Sha’aban Ibrahim Sharada, ‘’the statement said.

‘’Going by Hon. Sharada’s track records and antecedents, rising from a journalist to Personal Assistant to the President and Member of the House of Representatives coupled with the massive achievements he has made and the lives he has impacted within six years despite all the distractions and obstacles from the serving government of the state, we are optimistic that if he emerges the candidate of the APC in the Kano State governorship election, he will defeat all the contestants hands down and make Kano proud and great again. 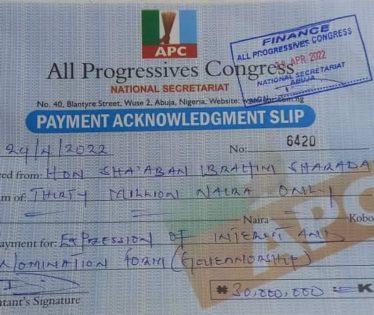 The statement said this gesture is as a result of his dogged determination and commitment towards fighting for the rights of the less privileged, empowerment through skill acquisition programmes, issuance of capital and provision of job opportunities at the federal level.

‘’Special thanks to the leadership of the beneficiaries of the N-Power program, batch C from the 44 local governments of the state.’’

‘’It was from the 24th April, 2022 that out of over 3,000 young men and women from the 44 Local Government Councils of Kano who benefited from N-power Program facilitated by Hon Sha’aban Sharada, under the auspices of ‘FitilarJama’ar Kano’ submitted their monetary contributions totalling ten million Naira (N10,000,000) where their leader, Malam Abba Garba said at least 2,000 of this number made a monthly contribution of 1,000 each which amounted to ten million Naira ( N10,000,000).’’

‘’This is in appreciation of the gesture of the leader of Kano youths, Hon. Sha’aban Ibrahim Sharada, who they said assisted them to get enlisted in the N-Power program that earns them approximately one hundred million Naira (N100,000,000) monthly combined.’’ 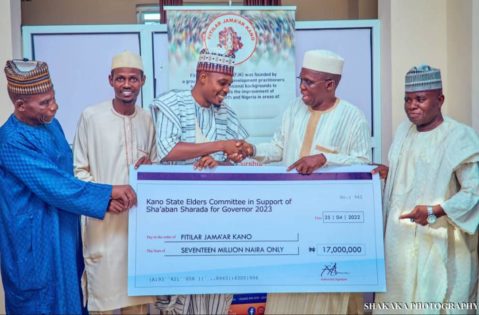 ‘’Similarly, on Monday, 25th April, 2022, the Kano Elders’ Forum in support of the candidacy of Hon. Sha’aban Ibrahim Sharada under the leadership of Alhaji Sani A. Sani presented a cheque in the sum of seventeen million Naira (N17,000,000) as their contribution. Also, on this day, a group of young Kano entrepreneurs in support of the aspiration of the federal lawmaker led by Alhaji Ibrahim Dan Fulani gave their own contribution amounting to four point five million Naira (N4,500,000).’’

‘’Also, a number of persons who would not want their names mentioned sent their contributions totalling three million Naira (N3,000,000) which brings the total amount realized to fifty one million four hundred thousand Naira (N51,400,000).’’

The statement added that since the money required for the purchase of the form is completed, ‘Fitilar Jama’ar Kano’ is announcing that it has stopped collecting cash or cheques; but the organization is open to contributions to strengthen the candidacy of this determined leader of Kano youths through the following bank details: FITILAR JAMA’AR KANO, Account Number: 0088656822, Sterling Bank.

Prev Next
41 Comments
Leave A Reply