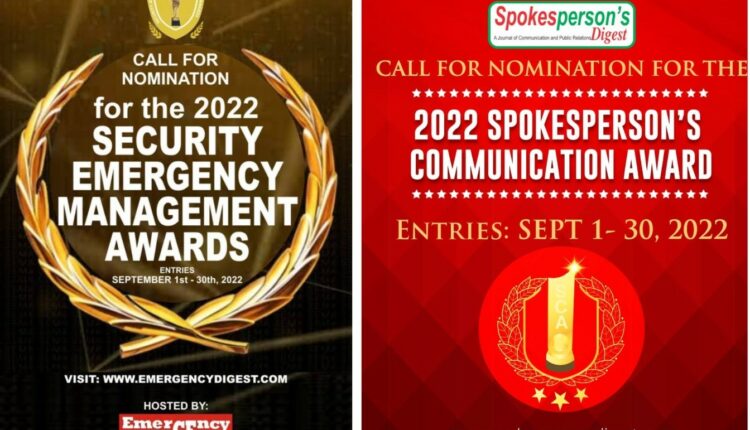 Image Merchants Promotions Limited (IMPR), the publishers of PRNigeria and Economic Confidential has called for nomination for the annual Security and Emergency Management Awards (SAEMA) and the Spokespersons Communication Awards (SCA) 2022.

The two awards are hosted by Emergency Digest and Spokespersons Digest, both specialised publications of IMPR.

While Emergency Digest’s SAEMA awards would recognize outstanding gallantry, rescue efforts and contributions to safety and security, the Spokesperson’s Digest’s SCA awards are instituted to recognize the most outstanding public relations campaigns, communications strategies and those beyond the campaigns that are carried out between 2021 and 2022.

Entries for nominations for different categories of the awards are open till September 30, 2022.

The Panel of Judges for Security awards are seasoned and respected security experts and humanitarian workers, conflict and crisis management scholars.

The panel of juries for the Spokespersons Awards is comprised of seasoned communication scholars, PR specialists, public communicators, media strategists, and journalists.

For Nomination clicks visit these weblinks: