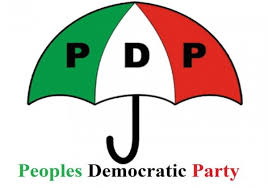 The electoral body said this is in compliance with the order of the Federal High Court which restrained the party from tampering with the Kano authentic state executive.

The INEC directives and rejection have rendered nullity the decision of the PDP to proceed to inaugurate the illegal Caretaker Committee despite the order of the Court and INEC decision.

This action of the Commission means that if the PDP does not revert to the authentic executive, the party will not likely have a governorship candidate and parliamentary seat candidates for the 2023 elections.

The INEC’s position on the matter was contained in a later dated April 6, 2022, and signed by its Secretary. Rose Oriaran-Anthony.

The letter which was addressed to the party’s National Chairman, Dr Iyorchia Ayu, read, “Please refer to your letter Ref. PDP/DOM/GF.2/VOL1M/22-055 dated 30th March 2022 in which you notified the Commission of the decision of the PDP National Working Committee (NWC) to appoint a Kano State Caretaker Committee.

“This is to draw your attention to an order of Federal High Court, Abuja (suit no. FHC/ABJ/CS/393/2022) which has restrained the commission “from accepting any list of Interim Caretaker Committees” in respect of your Kano State Chapter. 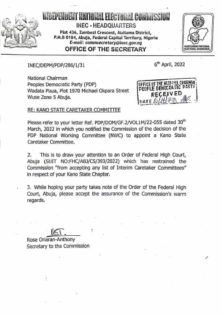 “While hoping your party takes note of the order of the Federal High Court, Abuja, please accept the assurance of the Commission’s warm regards.”

The PDP had in a March 30, 2022 letter sent the names of the seven-member Kano State Caretaker Committee to the Commission.

The letter was signed by Ayu and the party’s National Secretary, Sen. Samuel Naemeka Anyanwu.

Maradona’s “Hand of God” shirt expected to fetch about N2.2bn at auction

JUST IN: Ex-President Jonathan escapes death, as 2 of his aides die in auto crash

Prev Next
13 Comments
Leave A Reply