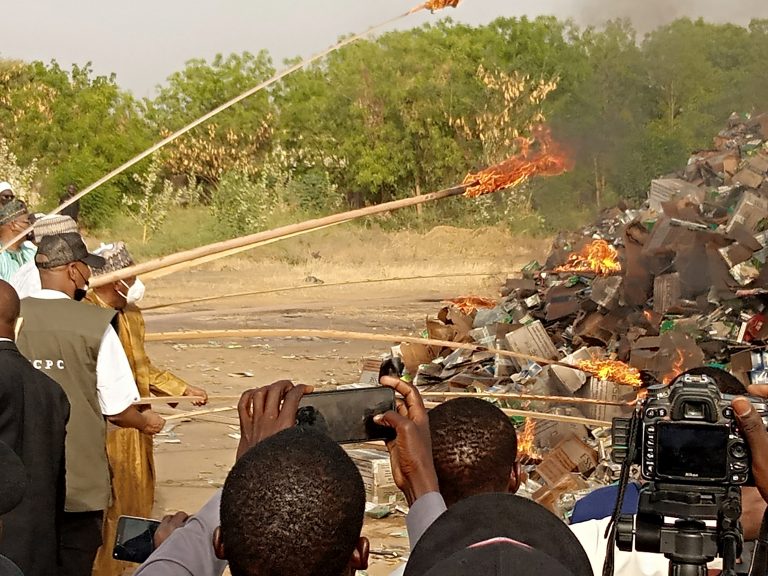 Speaking during the destruction of the items, Gov. Abdullahi Ganduje said the seizure of such a quantity of the items was a clear indication that his administration is succeeding in the fight to safeguard the health of the people.

According to him, his administration will not relent in its efforts towards ensuring that the state is free from such illicit products, and drug abuse among the youths.

“We will make sure that the state is not only dropping from the high position in drug abuse in the country but that it’s free from drug abuse.

“We are working towards the establishment of a law that would ensure that those engaged in selling fake, substandard, adulterated, expired and unwholesome products are brought to book with serious punishment, ” Ganduje said.

In his remarks, Dan’agundi said the items being destroyed were seized within the past three months when he took the mantle of leadership.

According to him, upon assumption of duty as the acting MD, the governor instructed him to do everything possible to ensure that those products are no longer in existence in the state.

“I wish to inform you that these seizures were carried out during our operations within the past three months, and we made seizures on a daily basis.

“In the next three months, I have the confidence that we are not going to make such a seizure because the perpetrators know that we are ready for them and we have arrested some of them.

“What you are seeing here, we have one over three of it at our warehouse waiting to be destroyed. And those items we seized are so dangerous to health,” he said.

Dan’agundi further commended  Ganduje for approving the recruitment of 100 casual staff, with the release of their one-year allowances to the CPC.

According to him, “When I became the acting MD, I realised that there was never a time the CPC received up to N10 million. but during my stay, the governor has released N50 million for us to carry out our assignment.

The acting MD further commended all security agencies for supporting the council towards achieving its set objectives. (NAN)