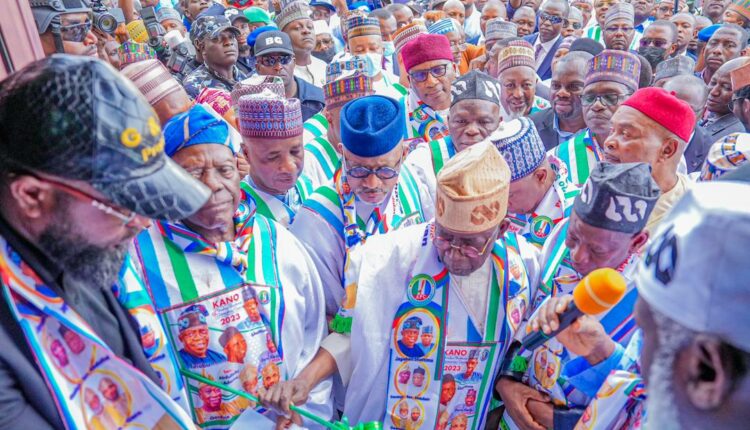 The Kano State Tricycle Association Forum (KASTAF) has promised to mobilize its members to deliver 500,000 votes for the Presidential Candidate of the All Progressives Congress (APC), Asiwaju Bola Ahmed Tinubu, and the APC Kano Gubernatorial candidate, Dr Nasiru Gawuna, in the 2023 Presidential and governorship elections.

The Chairman of the Forum, Alhaji Mansir Tanimu, made the promise on Thursday when he paid a courtesy visit to the Managing Director of Kano State Road Traffic Agency (KAROTA) who doubles as  Director of Northwest Support Group of Tinubu Campaign Council, Bappa Babba Danagundi, in his office.

He said the move was necessary in order to reciprocate the government’s gesture of listening to the complaints of its members and the promise made by the state government to look into possible ways of supporting them to improve their business.

According to him, ”The main reason we are here today is to thank the state government for listening to our complaint on the recent ban and the promise it made to support our members with taxi cabs and buses to enhance their business without necessarily reducing their number and sending them out of business.”

He said the Forum would deliver 500,000 votes each to Tinubu and Gawuna because the registered tricycle operators have the capacity to deliver the votes in view of the fact no tricycle rider has less than 10 persons under him.

“So, if you consider the number of registered tricycle riders in the state, It is possible for them to deliver even more votes than that.”

According to him, they are going to conduct another rally as soon as the Governor gives them the go ahead to do so.

He therefore commended their members for not engaging in strike or protest when the government banned them from operating on some major roads in the metropolis which, according to him, were the reasons why the government listened to their complaint and reversed the order.

In a remark, Dan Agundi commended the officials for the visit and assured them of the state government’s commitment to support them with a view to improving their business.

KEDCO gets new Head of Communication