Katsina State Governor, Aminu Bello Masari has approved and released N500 million to all the 34 Local Government Areas of the state to mobilise residents to welcome and cater to the needs of President Muhammadu Buhari during his two-day official visit to the State scheduled for January 26 and 27, SOLACEBASE has learnt.

Confirming the development, a letter to that effect conveyed the approval of Gov. Masari, authorising the release of “N14,695,588.00 to each of the 34 LGCs totaling N499,650,000.00 (Four Hundred and Ninety Nine Million, Six Hundred and Fifty Thousand Naira Only) from the available balance of the 34 LGCs in the Local Government Joint Account to enable the LGCs to cater for adequate and effective mobilization of citizens to receive Mr. President during an official visit to Katsina State from 26-27 January, 2023 was signed by Yahuza S. Ibrahim, for Permanent Secretary, Katsina State Government House and addressed to the Commissioner for Local Government and Chieftaincy Affairs.

A copy of the letter sighted by SOLACEBASE was sent to the office of the state’s accountant general, Ministry of Finance and auditor-general to fast-track disbursement before Muhammadu Buhari’s arrival by January 26th . 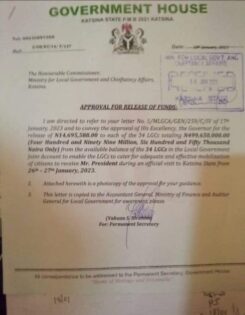 Katsina State  where about 70 per cent residents live below the poverty line, according to a United Nations assessment last September, hence half a billion naira mobilisation funds for the mere purpose of welcoming the president is considered wasteful by many.