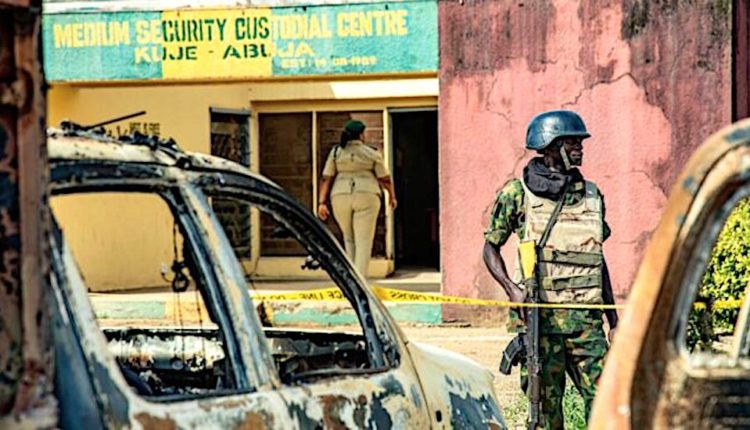 The Nigerian Correctional Service (NCoS) said it was working with security and intelligence agencies to track and arrest all prisoners who escaped from Kuje and other correctional centres.

Mr Abubakar Umar, the NCoS spokesman, told the News Agency of Nigeria (NAN) on Thursday in Abuja that the collaboration also involved the provision of tight security in all correctional centres nationwide.

He said that it was important for security agencies to work together in order to end existing and emerging security threats in the country.

Umar said that security agencies such as the military, Police, Civil Defence and others, had been very helpful to the correctional service.

“Though there has been a robust collaboration among the security agencies especially where we have high profile inmates in our facility being guarded by the Police, DSS, along with our armed squad, but more is still required.

“Above all, intelligence has to be increased if our quest to tackle the ugly trend headlong is to be realised,” he added.

The spokesman said that the NCoS Controller General had directed the service armed squad to gather more information that could help in re-arresting the fleeing inmates.

“We are also in collaboration with the Ministry of Defence, office of the National Security Adviser and other intelligence and security agencies to ensure that the fleeing inmates were re-captured and brought back into our facility.

“So far, the synergy has yielded positive results as quite a number of them have been re-arrested, but unfortunately some are still on the run, but there is no way they will not be re-captured,“ Umar said.

He assured that the service had taken measures to forestall further attacks on correctional centres nationwide.

The spokesman said that as a red zone, the custodial facilities would be fully protected from intruders.

Umar, however, expressed concern over the encroachment of residential homes into areas designated as buffer zones around correctional centres.

“The lack of buffer zones is seriously militating against effective security of our facilities in the country,“ he added.

He agreed that the encroachment was largely due to increase in population and urbanisation, but said the trend must stop.

“In states where we have such residential buildings close to our facilities, we do appeal to the relevant agencies to assist in halting such encroachment.

“However, the Minister of Interior, Rauf Aregbesola, as well as the Comptroller-General of NCoS, Haliru Nababa, are working together to addressed it,“ Umar added.

The NCoS spokesman also said that work on the 3,000-capacity correctional centres across the six geo-political zones of the country were ongoing.

“Construction work is already ongoing in Karshi, FCT and in Kano State, while another one is ongoing in Port Harcourt.

“These 3,000-capacity structures have all the facility required of a modern correctional centre, and there is a buffer zone created in them that does not allow encroachment of any nature,“ he said. (NAN).