This investigation by SOLACEBASE reveals an attempt by the main opposition political party in Kano State, the New Nigerian Peoples Party (NNPP), to compromise the 2023 general election by recruiting party agents for the collection of voters’ card data and a picture of the voters’ card of Nigerians, particularly in rural communities.

Bala Audu, is an agent of NNPP in Karaye LGA, coordinating the PVC data collection for his party. Audu said in his local dialect, “Bazamuyi komai da shiba, muna so mu san suwaye ne basuyi register ba.” meaning, we are not collecting the data for any personal use. We just want to know the number of eligible voters with PVC and those who have not registered across rural communities, Audu claimed.

A copy of the form shared by Audu, however, indicates that there is a full capturing of all information on the voters’ card.

When SOLACEBASE reporter visited some of the communities to verify Audu’s claim, it turned out to be contrary to Audu’s claim.

In Kwanyawa community, Karaye LGA, Zainab Danladi narrates how she, her husband, and her co-wife were manipulated into providing their PVC details with a promise, “We were told that if we provide our data and allow them to take pictures of it, our community will be prioritized after the election. They said they will provide our children with scholarship, and free fertilizers for irrigation farming. It was under this assurance that we provided them the details and they took picture of it,” Danladi said.

It was a juicy offer for Sarkin Ali, and he couldn’t resist it. “Fertilizer is one of the things we need here, and scholarship for our children is another thing since we can’t afford to send them to good schools. We trust Kwankwaso for leading in providing scholarships for citizens so it’s an assurance for me,” Ali Said. 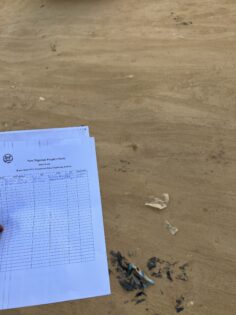 In Tudun-Wada LGA, where Alhassan Doguwa the Majority Leader in the House of Representatives hails from, over 15 communities have been captured according to NNPP party agent in charge of data collection, Ibrahim Alkali.

“We started the collection of data in Tudun-Wada just after the Continues Voters Registration ended, and we have covered about 15 communities. It’s a harmless party strategy. The intention is just to know the voting strength and the numbers of people with PVC in each community,” Alkali said.

“We are doing this across the 44 LGAs in Kano state, and with this, we assured you, no one can rig any election in Kano state. It is hectic and financially demanding, but helpful in the end,”

Danjuma Muhammed, in Yelwa community, secured his voter card in 2014 but has never participated in the voting process because he never believed in election. So it was easy for him to provide his data and that of his family members to the NNPP agent without knowing the possible implication. 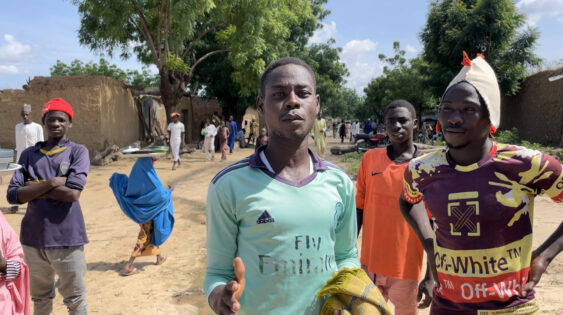 “The voter card has never been useful for me since I collected it. So when they came with the assurance that after the elections, we are going to have a good road to transport our farm produce to the market and from the farm at ease. I couldn’t deny them the information they need.”

Balarebe Nura, member of the ruling All Progressive Congress (APC) in Kano State, described the NNPP as a desperate party.

“We have received several reports about the party trying to do some grassroots manipulation. We wish them goodluck. It is only a desperate party all in an effort to rig the election. We understand all of these strategies, but we are watching.”

Abdullahi Rogo, spokesperson for the New Nigerian Peoples Party (NNPP) in Kano State, in a telephone interview, denied the claim. “We are not aware of any of such activity, our party is open to meet at the ballot with every other party transparently without any intention or what so ever to be involved in any scandalous or electoral misconduct.”

However, Kano State INEC Public Relations Officer (PRO) Adam Ahmed Maulud, while speaking to SOLACEBASE, on the matter, said the act is all a waste of time.

“No political party can manipulate the electoral process of the 2023 election, as a body, we are aware that there will be different political strategies by political parties to manipulate the process, but with the BIVAS, INEC has cut-off all lines that could lead to such possibilities of using someone else’s data to vote on their behalf, the BIVAS machine is a new technology INEC is deploying for the election, and it can only be the bearer that would be accredited or else the machine will bounce back any other identity, so I can guarantee you that it’s all a waste of time.”

Ibrahim Galadanchi, a political analyst in Kano, also insinuated that the 2023 general elections could be rigged scientifically if the authorities don’t act fast.

“We are in a technological era where even a 21-year-old boy can help you design a gadget that can be used to break into a sophisticatedly locked site. So for the voters’ if some of the information is captured it can be manipulated.”

Kelvin Apochi of Alliance for Credible Election, a Civil Society Organization, described the voter card as an official and private document that should be treated like every other document.

“No political party should have business with the voters’ card of any eligible voter. While they may have their reasons for collecting such sensitive data, it is a red flag for us the CSOs. We monitor such acts and draw the attention of the INEC to avoid any electoral manipulation on election days.”

The Chairman of the Independent National Electoral Commission (INEC), Prof. Mahmood Yakubu, at a pre-event dinner organized by the European Union (EU) vowed that the commission would do everything in its power to protect the sanctity of the ballot.

Yakubu also allayed the fears being expressed in certain quarters that the 2023 elections could be rigged, promising that the commission would do everything in its power to ensure a free and transparent election.

This SOLACEBASE investigative publication is supported by Civic Media Lab.

Like Tinubu, Atiku suffers gaffe, says ‘vote for A… I mean PDP’