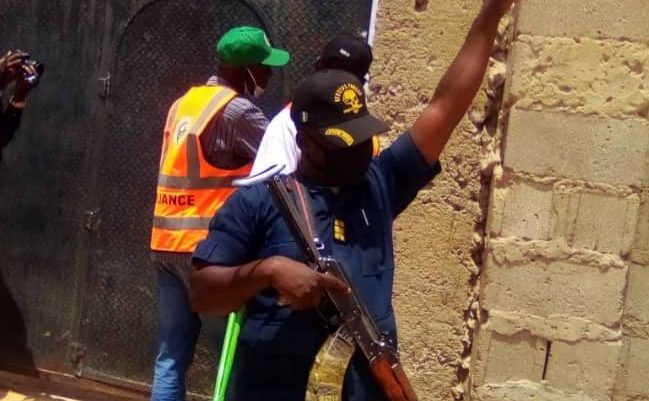 The Kano Command of Nigeria Security and Civil Defence Corps (NSCDC) has shut down a factory in Ungogo Local Government Area of the state over allegation of producing fake lubricating oil.

Spokesman of the command, ASC Ibrahim Idris-Abdullahi, made the disclosure in a statement on Thursday in Kano.

Idris-Abdullahi said one Ali Ibrahim was arrested in the act of alleged production of adulterated lubricating oil at Rangaza village in Ungoggo.

He said the personnel of the corps also seized 25 drums containing 200 litres each of adulterated engine oil, while the fake products were labelled with Total, Mobil and Conoil stickers.

He said the operation was successfully carried out by operatives of the corps’ anti-vandalism unit following a tip-off by officials of the Standard Organisation of Nigeria (SON).

“The warehouse where the illegal business is being run has since been sealed.

“The suspect, Ali Ibrahim a.k.a. ‘Mirror’ is currently in the custody of the corps for further investigation after which legal action will be taken against him,” he said.

The statement quoted  Mr Abu Abdu-Tambuwal, Commandant of the Corps in Kano, as reiterating commitment to end illicit trade, production of fake products and other criminal activities in the state.  (NAN)

Prev Next
32 Comments
Leave A Reply