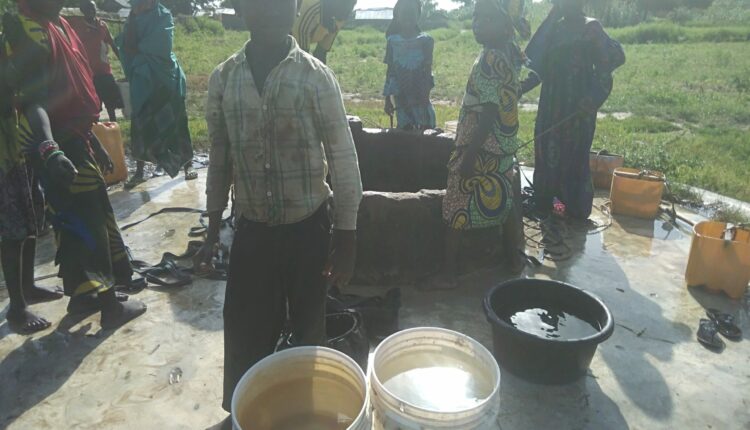 The Federal Ministry of Water Resources, with funding from the COVID-19 Intervention Fund, claimed to have executed a multi-million naira solar-powered water boreholes across six local government areas in Bauchi north. However, WikkiTimes’ investigation can authoritatively reveal that residents in the affected LGAs still trek long distances to source water for domestic use from unclean and dirty sources despite the release of funds to address their water needs. WikkiTimes’ Idris Kamal, reports that one of the contractors who was contacted to explain why the project was not executed despite the release of funds says his office was “too busy” to respond to WikkiTimes’ request for an explanation. The water project remains a mirage, but the money for its execution has mysteriously disappeared.

Abdulsalam Ahmed, a resident of Disina community in Shira Local Government Area of Bauchi State wakes up at dawn every day, and treks for at least 20 minutes to fetch water from a well for his family’s domestic consumption. This is the only alternative he has to get water for his two wives and nine children.

Ahmed has been going through this herculean task for the past 15 years, if he fails to go for whatever reason, his family will have no water to use for the day.

Trekking the distance is not the only nightmare for Ahmed, he still must contend with the long queue of jerricans and buckets waiting for their turn when he gets to the well. This can sometimes mean waiting for hours.

Ahmed sometimes enlists the help of his adolescent children, but this might mean going late to school for them.

“You cannot have access to water nearby. You have to take the long trek or thirst, stay hungry and dirty,” he said.

Waking up at dawn for a water run is now a normalised routine for residents of Disina.

Sule Mai Shayi, a tea seller who appears to be in his late fifties, said when dry season sets in, even the water they trek the distance to get, becomes salty, hence not friendly for drinking and cooking and inimical to their wellbeing.

He said, “The water is sour and salty, especially during the dry season. You cannot drink it. We only wash clothes and plates with it.”

To provide a solution for the residents of villages in Bauchi, the Federal Ministry of Water Resources, in two instalments, released N99,366,120.00 and another N75,673,924.71 to Diamond Leeds Limited for the construction of motorised and solar-powered boreholes in the region.

In another separate payment on 31st December 2020, the same company was paid N75,673,924.71 for the construction of eight solar-powered boreholes in the same locations.

WikkiTimes’s findings revealed that these projects were not executed despite the releases.

The ministry of water resources, in breach of a critical provision of the Public Procurement Act 2007, failed to give details of the exact locations where the boreholes were to be cited in each of the benefiting local government areas. Therefore, the reporter visited five political wards in each of the six benefiting local governments and interviewed residents all of whom noted no such projects were executed in their wards or neighbouring wards. 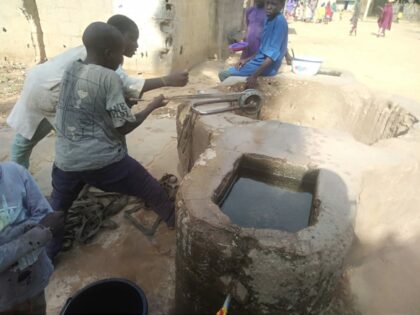 In addition, Diamond Leeds Limited, the firm that was paid different amounts twice for the project, failed to give an account of where the boreholes were sited in the region.

Mr Izzuna Lawrence, Spokesperson of the company, in a telephone conversation said Water Resources Ministry is better placed to juxtapose why the borehole project was not executed despite the releases.

“The information you are looking for can best be given by the ministry because our office is too busy to give an explanation about the issue you are asking of,” he insisted.

A CAC search conducted about the company shows that while it was registered in 2008, its status is ‘inactive,’ an indication that may have defaulted in Annual Return payment to the commission.

To get water to help meet daily ends, residents of Gwarai ward, a community in Itas-Gadau local government, means trekking a distance of about four kilometres, yet the hard-sourced water is not health-friendly because it is contaminated with spirogyra among other things.

The water woes of inhabitants of Gwarai are fiercer because solar-powered boreholes which were dug several years ago in the community have broken down.

“This reality is single-handedly responsible for the long queues around the only Well from which we fetch water,” Musa Tela, 56, said.

He added, “For you to get water from this well, it will take you an average of 45 minutes.” This excludes the trekking time. 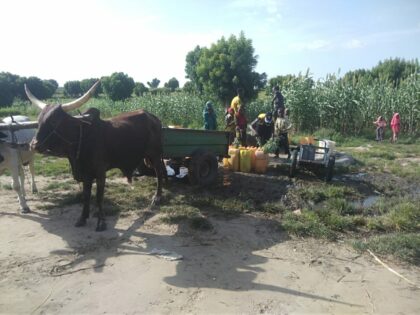 Daram, a community that is only two kilometres away from the administrative headquarters of Jama’are local government, relied on water drawn from a dirty well for the past 30 years.

WikkiTimes learned that the well is grossly incapacitated to meet the water demands of the immediate residents of Daram let alone the neighbouring hamlets that also relied on it for water.

Jauro Sulaiman Daram, a resident of the community said, “This well has been serving us and neighbouring hamlets for the past 30 years, yet the population that relied on it keeps expanding day by day.”

“Alternatively, we have to cross the Kano Expressway to Garin-Babani for us to get water. This option has so many hazards attached to it because one may end up being hit by a truck. It takes an average of one hour to fetch water from there,” worried Muhammad Jauro Halliru explained.

He said the water his compatriot trekked for an hour to the source is unsafe for human consumption. “It is dirty and salty,” he insisted.

For most residents of Gijina Ward in Itas-Gadau local government, trekking to the only water source is not the only nightmare faced but also endless hours they spend queuing to take their turns to fetch water.

On average, a household owner in the community spends about 30 minutes on the line before his turn arrives.

This, however, accordion to Musa Musa, not real name, affects women’s preparation for dinner because the queue is long in the evening.

“Yesterday I came back from the farm in the evening only to discover that there was not even a cup of water in my compound to be used for our dinner. I rushed to the well to get water but it took more than an hour before I get it because the file of bouquets I meet is long. 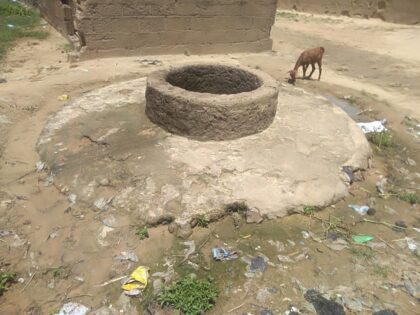 “It is even worse with children. Because if you send a teenager, he or she can spend more than two hours without even being able to get water,” he said.

Ibrahim Muhammed, another resident, told WikkiTimes that because of their desire to get water for their parents, children used to fight while queuing up for water at the well.

Maimuna Isa, a house this reporter met at the Well when he visited, said the heavy queue that characterised fetching water in the evening time dealt a heavy blow to their preparation for dinner, adding that, sometimes, their families eat dinner at 9 pm or even 10 pm depending on availability of water in the compound.

In Mashema ward of Itas-Gadau local government, children oftentimes went to school late having spent hours in the queue in the morning.

A resident who does not want to appear in print said teachers complained bitterly about incessant lateness to school.

“We have no option because we needed the help of our children to be able to get the desired water for the family every day but because of the high population density of the community coupled with water scarcity due to the non-availability of clean water sources in the area, we have to send our children to the well for water where they waste time, thus set out late for school,” he said.

Sagir Jibrin Gwarai added, “This problem is not only peculiar to western schools alone but also Islamic schools operated mostly in the evening time.”

Halima Musa, a resident of Kubdiya community of Gamawa local government, said most mothers cannot help but send their children to help them get water, adding that this is not helping the educational pursuit of the teenagers as, sometimes, they either jettison going to school for a day or they attend classes lately.

Excruciating water scarcity forces residents of Itas, the headquarters of Itas Gadua local government to depend on costly water sold by vendors in the area.

Checks by WikkiTimes across the headquarters of local governments making up the zone that ought to benefit from the project reveal that heads of families patronise water vendors because of a lack of access to water.

For instance, in Gadau, the administrative seat of power of Itas-Gadau local government, Adamu Muhammed, a resident said, “we buy water from vendors with our money every day.”

He added, “as the dry season creeps, sometimes you cannot find a water vendor to buy from because of high demand coupled with creeping scarcity.” 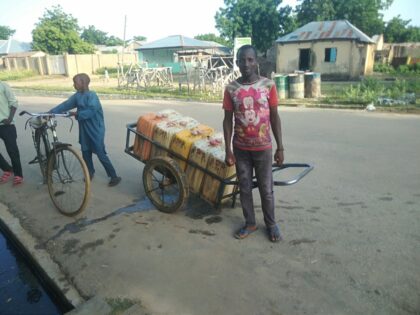 Bashir Shehu Mashema, a water dealer in Mashema told WikkiTimes that he maintained four wholesale water-selling points where water vendors bought from him and in return, sold out to household owners in the community at exorbitant prices.

“Despite the fact that I am making money from the business, I will be happy if we will have more sources of water.

“We open for business from 6 am to 6 pm every day to sell water to vendors,” he said.

In Gamawa, one cart of water containing 12 jerrycans goes for N500. The availability of water in the area depends on a stable supply of electricity. However, with an unstable power supply, residents are forced to buy water from vendors at higher prices.

People in some of the communities this reporter visited across the northern part of Bauchi State grapple with water-borne diseases because of drinking contaminated water.

WikkiTimes gathered that spread of typhoid and cholera, especially during the rainy season is eminent in those communities.

Isah Adamu, a resident of Bombiyo ward in Shira local government said, “the wells we source water from are not covered, thus dirt and dust contaminated the water, hence when people drink water from the well Cholera outbreak looms.”

Nura Kawule Gijina, pointing to a water container, said each time they store water for later use in containers, germs grow in it in less than 24 hours. “As humans, we cannot drink this kind of water and expected to be healthy,” he insisted.

For inhabitants of Garin Babani in Jama’are local government, fetching water from the only borehole dug for the community over the last 40 years translates to gathering rust-filled water which is not healthy for consumption.

“This community has had only one handpump borehole for the past 40 years. It gushes rust-laden water notably during the dry season. People are shy of using its water even for their animals,” Muhammad Sani, who looked bewildered, said.

“Please can you call me back later? I am going to a meeting,” she said and hanged her phone abruptly.

The ministry did not respond to the email enquiry sent seeking clarification about the status and precise locations of the projects.

This publication is produced with support from the Wole Soyinka Centre for Investigative Journalism (WSCIJ) under the Collaborative Media Engagement for Development Inclusivity and Accountability Project (CMEDIA) funded by the MacArthur Foundation.

2023: Flood victims who lost their PVCs may not vote in Jigawa State