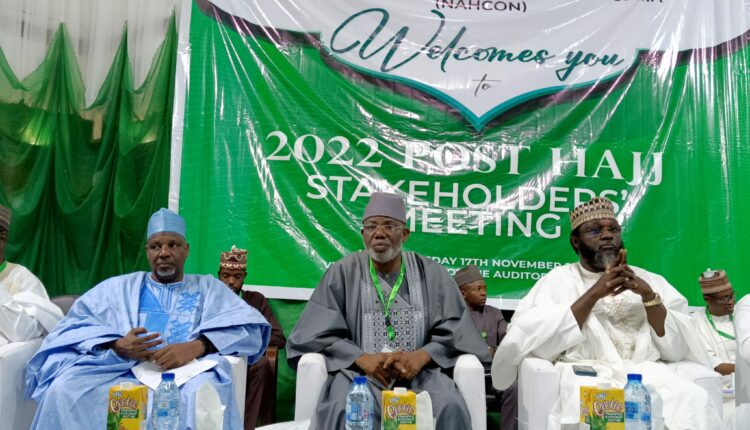 The National Hajj Commission of Nigeria (NAHCON)  has disclosed that the Saudi Ministry of Hajj and Umrah has intimated the commission of arrangement for 2023 Hajj operation.

The Chairman and Chief Executive Officer of NAHCON, Alhaji Zikrullah Hassan, made the disclosure at the 2022 Post Hajj Stakeholders’ Meeting, held at the National Mosque Auditorium, on Thursday in Abuja.

Hassan explained that the meeting was designed to bring together the crème de la crème of the hajj industry in Nigeria to brainstorm and collectively review the 2022 hajj and proffer solutions for improvement.

“Hajj 2023 is around the corner, it behoves on us all to focus on proper planning and prudence bearing in mind that our goal is to please Allah through our intending pilgrims who invested so much with the sole aim of serving their Lord.

“I am happy to inform you all that unlike last Hajj when the preparation started late due to absence of information, the Saudi Ministry of Hajj and Umrah has intimated us that arrangement for Hajj 2023 will begin with a conference via video communication scheduled for Dec. 21, between NAHCOH and the Ministry,” he said.

Hassan revealed that the policy for Hajj 2023 fare was to maintain the status quo; “that is to run the Hajj Saving Scheme concurrently with the conventional pay-as-you-go, as it was done during this year’s Hajj.”

He explained that the conjectural nature of hajj fare in Nigeria was the major factor that forced NAHCON to start the implementation of the Hajj Savings Scheme without delay.

“The scheme is an arrangement that offers an intending pilgrim a long-term contributory platform to pay for Hajj gradually within a desired period.

“This arrangement has the potential of boosting early hajj preparation with the prospect of enabling Hajj subsidy in future,” Hassan said.

The NAHCON boss commended the leadership of the Pilgrims Boards in all States for their contribution and patriotism in the execution of Hajj Savings Scheme and by extension all other stakeholders.”

He disclosed that some states that performed exceptionally well during the 2022 hajj would be honoured.

Hassan reiterated that NAHCON remains committed in serving pilgrims well, saying “with the support of stakeholders, we are confident that this is achievable.”

Also, the Chairman, House of Representatives Committee on Pilgrimage, Alhaji Abubakar Nalaraba, restated the commitment of the National Assembly to continue to work closely with NAHCON and other stakeholders in the Hajj industry to ensure that pilgrims have value for their money.

Nalaraba, however, urged NAHCON to work towards addressing some peculiar challenges experience during the 2022 hajj operation with a view to ensure hitch-free 2023 hajj operations.

In attendance were Sheikh Bala Lau, the National Chairman, Jama’atu Izalatul Bidi’ah wa Ikamatus Sunnah, representative of the Secretary to the Government of the Federation (SGF), Boss Mustapha, leadership of the Association of Hajj and Umrah Operators and others. (NAN)