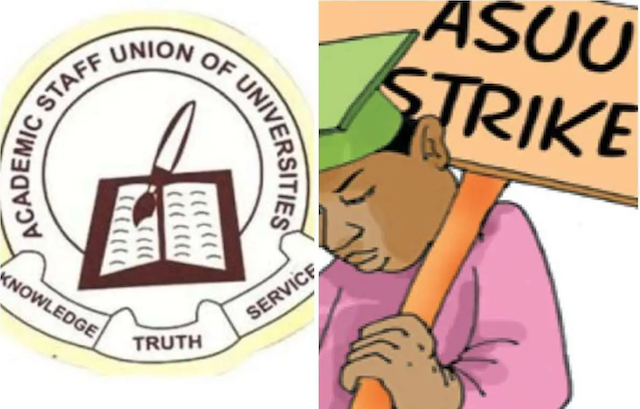 Students of Federal University Lokoja (FUL) on Monday pleaded with the Academic Staff Union of Universities (ASUU) not to resume its strike until after their (varsity’s) second semester exams.

The students’ plea came on the heels of ASUU’s Congress meeting on Monday deliberating on Federal Government’s alleged failure to pay its members’ salaries after resuming work on Oct. 14 from its 8 months strike.

A cross section of the students, who made the plea while speaking with NAN in Lokoja, said it would be disastrous if their exams scheduled to commence on Nov 14 would not hold.

Miss Joy Abuh, a Political Science student, said her prayer was that Monday’s ASUU congress would not end up with resumption of the suspended strike.

“We have just settled down after the strike suspension and seriously preparing for our second semester exams starting next Monday.

“It will be disastrous for us in FUL if the exams will not hold as scheduled, considering the eight months we have wasted at home.

“My fervent prayer is that the union will not declare any strike at the end of their meeting today in Abuja,” she said.

Another student, Adeiza Ibrahim, with Department of Education, lamented the effects of any further strike on the Nigerian students and called for a rethink from ASUU to allow academic activities continue while they settled their differences with the government.

“I think much damage has been done to the nation’s education system and there should be due consideration for a turn of new leaf because we’re talking about the our future, the youths of this country.

“If at the end, we won’t be allowed to write this semester exams, then it will be so terrible and devastating, ” Ibrahim asserted.

Apeyemi Abubakar, a 100 Level student of Chemistry Education said, “all we are begging for is for ASUU to allow us write this examination without any hindrance”.

“We have stayed home longer than necessary and now that we are back in campus, the Federal Government and ASUU should not allow anything to tamper with our educational pursuits anymore, ” she begged.

But Dr Joshua Silas, FUL ASUU Chairman, said, “we have no power of our own as a chapter to disobey our national body if it asks us to resume strike today, Nov 7.’

“As I speak with you, I am already in Abuja for ASUU’s Congress meeting holding today. Everything will rest on the outcome of the congress.

He said if eventually they resumed the strike after today’s congress, “I will indeed sympathise with our students, whose time table for the second semester exams is out and commencing Monday, Nov 14 with all things being equal,” Silas said. (NAN)

HND holders to be employed as assistant lecturers in polytechnics – NBTE