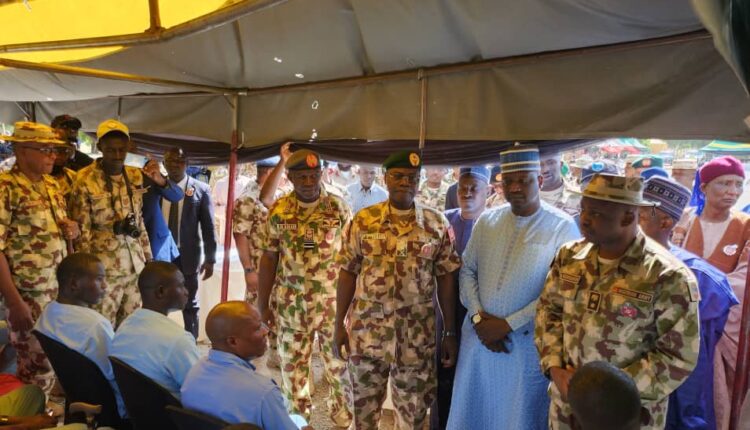 This is just as the Chief of Army Staff, COAS, Lt. Gen. Faruq Yahaya, and his counterpart, the Chief of Air Staff, CAS, Air Marshal Oladayo Amao, arrived Maiduguri, the Borno State capital, on Sunday morning, to celebrate the Yuletide with frontline troops.

The three wanted insurgents were eliminated at Mantari in Gezuwa area of Bama local government area of Borno State, alongside their colleague-terrorists, numbering over 75, a credible defence intelligence source told PRNigeria.

According to the source, the operation which resulted in the killing of Jega, Maimusari and Tukur, alongside other Boko Haram terrorists, was conducted last Tuesday.

“The airstrikes by our NAF aircraft was authorized after it was revealed that a Boko Haram terrorist Commander, simply known as Ikirima, had stationed his fighters and gun trucks at Mantari village, alongside other terrorists from other locations who had converged at the same location, on motorcycles and bicycles.

“Subsequently, the authorization for an air strike was given, leading to the elimination of several terrorists and structures in the area,” he said.

The military intelligence source, while speaking further, told PRNigeria that after the first wave of their airstrikes, some surviving terrorists found their way back to the same location to evacuate the bodies of terrorists neutralized.

“This thus provided an opportunity for a follow-up strike on the same location which has been confirmed very successful as over 200 terrorists were neutralized with dozens said to be in critical condition,” he added.

He said: “The timely intelligence received on their plans, especially their attempt to attack soft targets in Bama LGA thus helped in the successful air strike which has reduced their will to regroup and attack innocent citizens”.

Lt. Gen. Yahaya and Air Marshal Amao have both commended the efforts of the air and ground troops, as well as other security agencies under Operation Hadin Kai for the tremendous achievement being recorded in the theatre.

According to them, there has been a lot of improvement in the security situation in the region due to the ongoing operation, and urged the troops to continue to give in their best towards ensuring that the North East is completely rid of all terrorists.