According to the letter, Senator Bello Hayatu was suspended for embarking on anti-party activities based on the recommendation of a disciplinary committee instituted

It reads “Based on the recommendation of the disciplinary committee on the allegations of your anti-party activities and your failure to honour the invitation to appear before the committee to hear from you, your conduct is contrary to section 58(1) of the PDP constitution 2017 as amended, therefore the ward executive committee unanimously agreed to suspend you from all the activities of the party of six (6) months.”

Solacebase had reported the suspension of former governor Rabiu Kwankwaso, a few days ago by a faction of the PDP in the state. 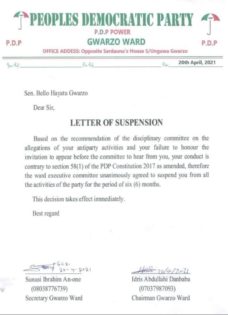 The suspension of Bello Hayatu Ggwarzo who contested the seat of the National vice chairman North-West of the PDP came days after the botched congress in Kaduna state.

The PDP has been factionalized into two camps in Kano, with Rabiu Kwankwaso leading one of the factions while Aminu Wali heads the other.

The ding-dong between the dingbat and the dumbass- Bala Ibrahim

Prev Next
37 Comments
Leave A Reply