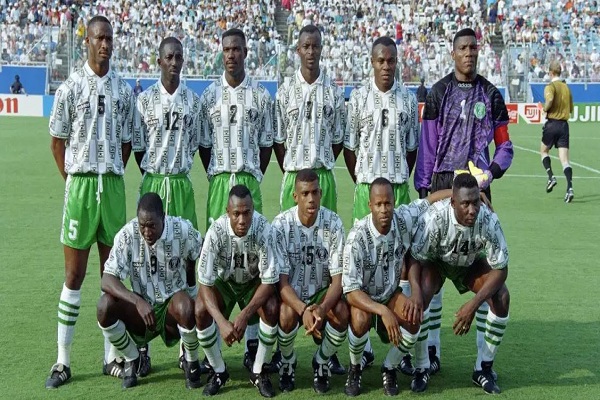 President Muhammadu Buhari on Monday redeemed houses allocated to the 22 members of the 1994 Super Eagles.

Buhari expressed regrets that 28 years after the super Eagles exploit in Tunisia, where it beat the Zambian team to emerge champion, the promise of reward of houses to each member has not been fulfilled.

“This occasion provided the opportunity to remember our heroes, the valiant Super Eagles to whom our country made a promise of providing Housing for winning the 1994 African Cup of Nations.

“On behalf of the Federal Government of Nigeria, I feel proud and privileged to redeem the promise made to these patriotic Nigerians, even if belatedly.

“It’s better late than never and I have approved allocation to redeem the outstanding allocation to 22 members of the Super Eagles in National Housing Estate located in their system of choice, ” he said.

The president ordered that keys and title documents would be handed over to the players at the commissioning of the houses in other team members’ states.

The News Agency of Nigeria (NAN) reports that the Super Eagles defeated Zambia 2-1 in the 1994 nation’s cup final to win their second title.

Nigeria won the 1994 edition of the Nations Cup hosted by Tunisia, with a set of players considered as the greatest team in the history of Nigerian football.

Emmanuel Amuneke scored a brace to give the Super Eagles victory over the Chipolopolo.

Over 20 INEC Commissioners to go before 2023 general elections-Official