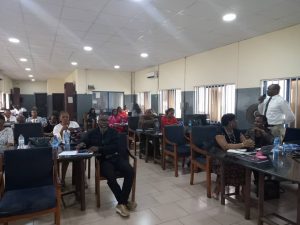 The Wole Soyinka Center for Investigative journalism (WSCIJ) on Wednesday trained the staff of News Agency of Nigeria (NAN), Lagos Office, on the current trends and realities in Investigative Journalism.

In her opening remarks, the Executive Director/CEO of WSCIJ, Motunrayo Alaka, said that investigative journalism helped to uncover and fight corruption and rot as well as promotes accountability and transparency in governance/the system.

According to her, most media people do not have a lot of time for reflection, hence the WSCIJ helps the media to reflect and do advocacy through the media.

She said the centre also collaborated with government, private sectors among others in advocacy and execution of projects.

Alaka said that the training for NAN Lagos Journalists was a multilevel intervention through which the Centre wants to use the media to hold government accountable.

She added that the centre wants journalists who would professionally beam search light on governments and make leaders own up to their mandates and responsibilities.

“The importance of Investigative Journalism aims to deliver the benefits of democracy to the most vulnerable in society, strengthen democracy, good governance and social justice across all levels of government.

“The WSCIJ started in 2005 and has raised the capacity of more than 2,040 journalists and students from over 180 organisations on education, journalism ethics and so on.

“This training is a multilevel intervention that the center wants to use, to use the media to hold government accountable.

According to her, the strategy is to build the capacity of 26 organisations with NAN as the first.

She advised journalists to report on a larger scale, utilise fact-checking classes, create platforms for conversation, enlighten journalists on media freedom and increase the knowledge of the media on its own rights.

She identified challenges of covering local news to include pressure to focus on national issues and knowledge gap with building audience-focused media.

She said other challenges included exposures to risks due to strong grip of politicians at the local, state and Federal levels alongside human and financial resource limitations.

However, Alaka said that NAN had the capacity to rise above all of the challenges.

Sheyin said that the training would further strengthen the efficiency of NAN operations.

He said that NAN had offices in every state of the federation, which contributed to its far and wide reach.

He said that competence in investigative journalism was lacking in the sector, with so many fake news on social media further challenging the situation.

“Everyone becomes a journalist once they have a smart phone and it can be misleading if one is not thorough or discerning.”.

He explained that any story coming out from NAN was always factual, authentic and fresh.

“NAN verifies before publication which makes the agency stand out and be more reliable”.

Also, Mr Deji Badmus, Founder, TV 360, explained the importance of having an investigative desk and the factors needed for turning out in-depth investigative stories.