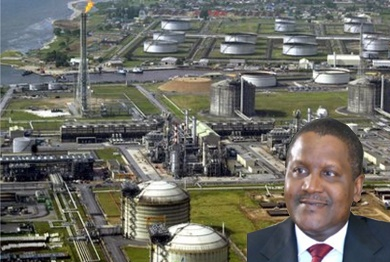 The Lagos Chamber of Commerce and Industry (LCCI) has backed the proposal by the Nigerian National Petroleum Corporation (NNPC) to acquire 20 per cent stake in the Dangote refinery.

The Director-General, LCCI, Mr Muda Yusuf, in a statement issued on Thursday in Lagos said the move was a step in the right direction.

The News Agency of Nigeria (NAN) reports that the NNPC had expressed interest in purchasing a 20 per cent minority equity stake in the 650,000BPD Dangote refinery.

The NNPC Chief Operating Officer, Refining and Petrochemicals, Mr Mustapha Yakubu, made the announcement at the just-concluded Nigeria Oil and Gas Opportunity Fair.

Yakubu said discussions were already going on with the Dangote Group for the acquisition of the stake which would further ensure undisrupted product supply to Nigerians.

The LCCI DG said the reality was that the Dangote refinery was a project of significant and strategic national importance, even though it was promoted by the private sector.

“Taking a stake in the project also makes a great deal of business sense, especially given how far the project execution has gone and our heavy dependence on importation of petroleum products.

“It also makes both commercial and nationalistic sense for the NNPC to express an interest in a project that has a good prospect to put an end to fuel importation and the associated leakages of public funds.

” It would also ensure the preservation of our foreign reserves as we currently spend billions of dollars annually on importation of petroleum products.

“This is in addition to the several multiplier effects arising from related spin-off industries like petrochemicals, fertiliser plants which resonates well with our aspiration for self-reliance and backward integration.

“The export prospects are also quite bright,” he said.

According to him, another exciting thing about this investment proposition is that the NNPC will be a minority shareholder and will therefore not take responsibility for the management of the refinery.

He noted that Nigeria had paid a huge price due to the inefficiency in the management of its public enterprises.

Yusuf said: “The model being proposed with the Dangote refinery is similar in a way to the Nigeria Liquefied Natural Gas company model which remains the best example of how government funds should be invested.

“It is a model that shields the investment from interference by politicians and bureaucrats.

“This proposition is much better than the decision to commit scarce public funds to the rehabilitation of decrepit government-owned refineries.”

However, Mr Tunji Oyebanji, Chairman, Major Oil Marketers Association of Nigeria, said marketers were hopeful that the Dangote refinery would be allowed to operate as a purely commercial entity without government interference.

Oyebanji said: “Our experience is that the world over especially in Africa, once a government is involved, decisions become political.

“Personally, I would prefer that if equity has to be sold, it should be to the Nigerian investing public, this will ensure that the refinery runs purely on a commercial basis.” (NAN)

Nigeria’s inflation jumps to 20.52% in August

Fertilizer coy flags off sales, distribution in LGAs of Jigawa