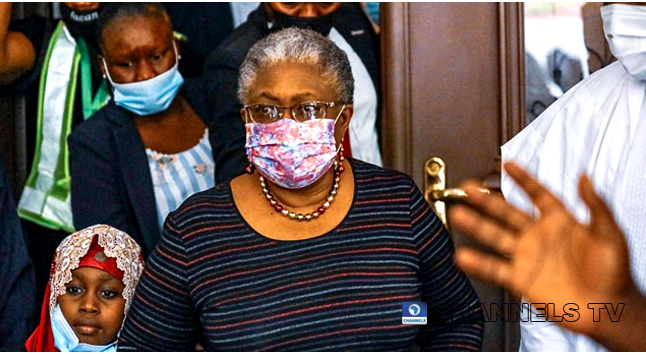 The new Director-General of the World Trade Organisation, Dr Ngozi Okonjo-Iweala, on Saturday, arrived in Nigeria on a one-week working visit.

Solacebase reports that she was received upon her arrival in the country on Saturday by the Permanent Secretary of the Ministry of Industry, Trade and Investment, Dr. Nasir Sani-Gwarzo.

Okonjo-Iweala resumed at the Geneva-based WTO on March 1, 2021, breaking a 26-year record by becoming the first female and first African director-general of the global trade and dispute settlement body.

Speaking with journalists shortly after her arrival via the Nnamdi Azikwe International Airport, Abuja, on Saturday, the 66-year-old former Finance Minister said she is in the country to see how to better assist Nigerian entrepreneurs and improve the economy.

She stressed the need for Nigeria to explore its share of trade in Africa through the African Continental Free Trade Area agreement.

The former World Bank director also said she will meet with President Muhammadu Buhari and a number of ministers in the coming days.

The Nigerian development economist, known for her African print Ankara wears and peculiar headgear usually tilted at a convenient angle, said in a recent interview that she unabashedly “love being African and being Nigerian”.

Prev Next
4 Comments
Leave A Reply